Using the Atacama Large Millimeter/submillimeter Array (ALMA) to observe an active galaxy with a strong ionized gas outflow from the galactic center, astronomers have obtained a result making astronomers even more puzzled: an unambiguous detection of carbon monoxide (CO) gas associated with the galactic disk. However, they have also found that the CO gas which settles in the galaxy is not affected by the strong ionized gas outflow launched from the galactic center.

The gas outflow driven by a supermassive black hole at the galactic center recently has become the focus of attention as it possibly is playing a key role in the co-evolution of galaxies and black holes. A widely accepted idea has described this phenomenon as the intense radiation from the galactic center in which is the supermassive black hole ionizes [1] the surrounding gas, even affecting the molecular gas that is the ingredient of star formation. The strong radiation activates [2] or suppresses [3] the star formation of galaxies. However, "we astronomers do not understand the real relation between the activity of supermassive black holes and star formation in galaxies," says Tohru Nagao, Professor at Ehime University. "Therefore, many astronomers including us are eager to observe the real scene of the interaction between the nuclear outflow and the star-forming activities, for revealing the mystery of the co-evolution."

Figure 1: Image of a DOG, WISE1029. The left and right panels show an optical image from the Sloan Digital Sky Survey (SDSS), and mid-infrared image from WISE, respectively. The image size is 30 square arcsecond (1 arcsecond is 1/3600 degree). It is clear that DOGs are faint in the optical, but are incredibly bright in the infrared. The SDSS spectrum indicates that strong ionized gas is outflowing toward us from WISE1029. Credit: Sloan Digital Sky Survey/NASA/JPL-Caltech

Astronomers believe that DOGs harbor actively growing supermassive black holes in their nuclei [4]. In particular, one DOG (WISE1029+0501, hereafter WISE1029) is outflowing gas ionized by the intense radiation from its supermassive black hole. WISE1029 is known as an extreme case concerning ionized gas outflow, and this particular factor has motivated the researchers to see what happens to its molecular gas.

By making use of ALMA's outstanding sensitivity which is excellent in investigating properties of molecular gas and star-forming activities in galaxies, the team conducted their research by observing the CO and the cold dust of galaxy WISE1029 (Figure 2). After detailed analysis, surprisingly they found, there is no sign of significant molecular gas outflow. Furthermore, star-forming activity is neither activated nor suppressed. This indicates that a strong ionized gas outflow launched from the supermassive black hole in WISE1029 neither significantly affect the surrounding molecular gas nor the star formation.

There have been many reports saying that the ionized gas outflow driven by the accretion power of a supermassive black hole has an enormous impact on surrounding molecular gas (e.g., *2,3). However, it is a rare case that there is no close interaction between ionized and molecular gas as the researchers are reporting this time. Yoshiki and its team's result suggests that the radiation from a supermassive black hole does not always affect the molecular gas and star formation of its host galaxy. 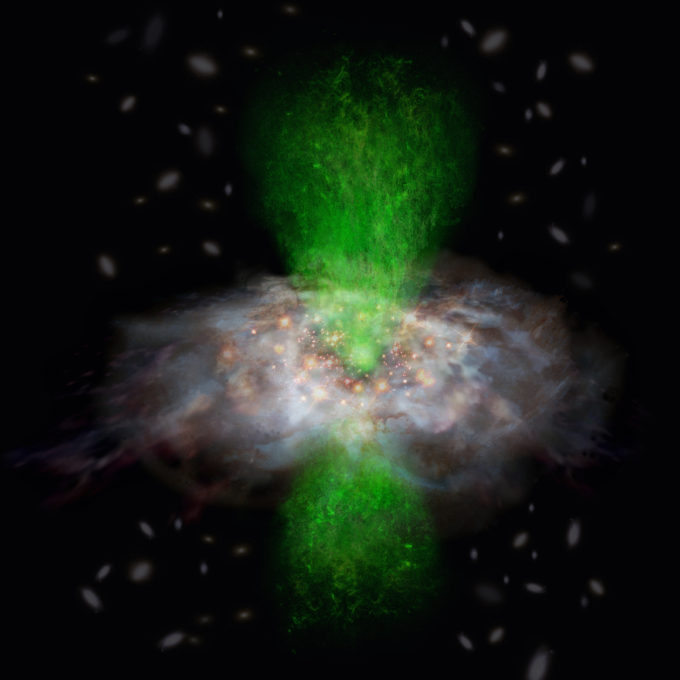 Figure 3: A schematic view of the fact that an ionized gas outflow (green) driven by the central supermassive black hole does not affect the star formation of its host galaxy. This situation may occur if the ionized gas is outflowing perpendicularly to the molecular gas. Credit: ALMA (ESO/NAOJ/NRAO)

While their result is making the co-evolution of galaxies and supermassive black holes more puzzling, Yoshiki and his team are exciting about revealing the full picture of the scenario. He says that "understanding such co-evolution is crucial for astronomy. By collecting statistical data of this kind of galaxies and continuing in more follow-up observations using ALMA, we hope to reveal the truth."

[1] It is a phenomenon where ultraviolet and X-ray radiations make a neutral gas plasma state.

[3] See the ALMA news "Chaotic Turbulence Roiling 'Most Luminous Galaxy' in the Universe" on February 18, 2016.

[4] See the press release from Subaru Telescope "Discovering Dust-Obscured Active Galaxies as They Grow" on August 26, 2015.

These observation results were published as Toba et al. "No sign of strong molecular gas outflow in an infrared-bright dust-obscured galaxy with strong ionized-gas outflow" in the Astrophysical Journal in December 2017.

This research was conducted by:

The Atacama Large Millimeter/submillimeter Array (ALMA), an international astronomy facility, is a partnership of the European Organisation for Astronomical Research in the Southern Hemisphere (ESO), the U.S. National Science Foundation (NSF) and the National Institutes of Natural Sciences (NINS) of Japan in cooperation with the Republic of Chile. ALMA is funded by ESO on behalf of its Member States, by NSF in cooperation with the National Research Council of Canada (NRC) and the Ministry of Science and Technology (MOST) in Taiwan and by NINS in cooperation with the Academia Sinica (AS) in Taiwan and the Korea Astronomy and Space Science Institute (KASI).