Two teams of astronomers have harnessed the power of the Atacama Large Millimeter/submillimeter Array (ALMA) to detect the prebiotic complex organic molecule methyl isocyanate [1] in the multiple star system IRAS 16293-2422. One team was co-led by Rafael Martín-Doménech at the Centro de Astrobiología in Madrid, Spain, and Víctor M. Rivilla, at the INAF-Osservatorio Astrofisico di Arcetri in Florence, Italy; and the other by Niels Ligterink at the Leiden Observatory in the Netherlands and Audrey Coutens at University College London, United Kingdom. This is the first ever detection of this prebiotic molecule towards solar-type protostars, the sort from which our Solar System evolved. The discovery could help astronomers understand how life arose on Earth.

“This star system seems to keep on giving! Following the discovery of sugars, we’ve now found methyl isocyanate. This family of organic molecules is involved in the synthesis of peptides and amino acids, which, in the form of proteins, are the biological basis for life as we know it,” explain Niels Ligterink and Audrey Coutens [2].

ALMA’s capabilities allowed both teams to observe the molecule at several different and characteristic wavelengths across the radio spectrum [3]. They found the unique chemical fingerprints located in the warm, dense inner regions of the cocoon of dust and gas surrounding young stars in their earliest stages of evolution. Each team identified and isolated the signatures of the complex organic molecule methyl isocyanate [4]. They then followed this up with computer chemical modelling and laboratory experiments to refine our understanding of the molecule’s origin [5]. 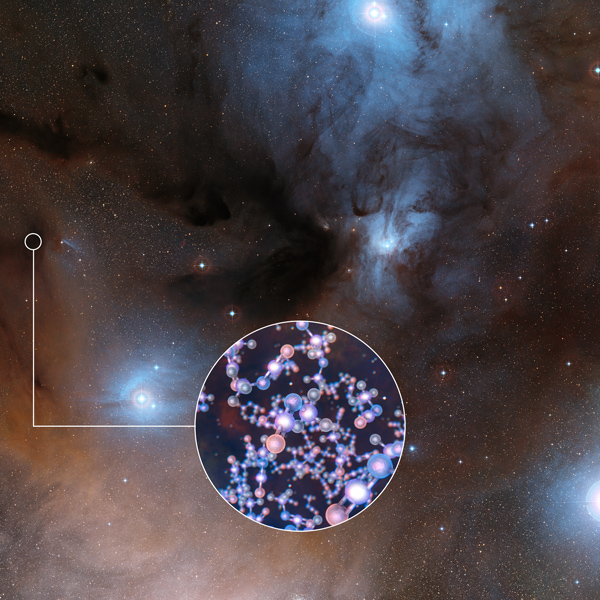 IRAS 16293-2422 is a multiple system of very young stars, around 400 light-years away in a large star-forming region called Rho Ophiuchi in the constellation of Ophiuchus (The Serpent Bearer). The new results from ALMA show that methyl isocyanate gas surrounds each of these young stars.

Rafael Martín-Doménech and Víctor M. Rivilla, lead authors of one of the papers, comment: “We are particularly excited about the result because these protostars are very similar to the Sun at the beginning of its lifetime, with the sort of conditions that are well suited for Earth-sized planets to form. By finding prebiotic molecules in this study, we may now have another piece of the puzzle in understanding how life came about on our planet.” 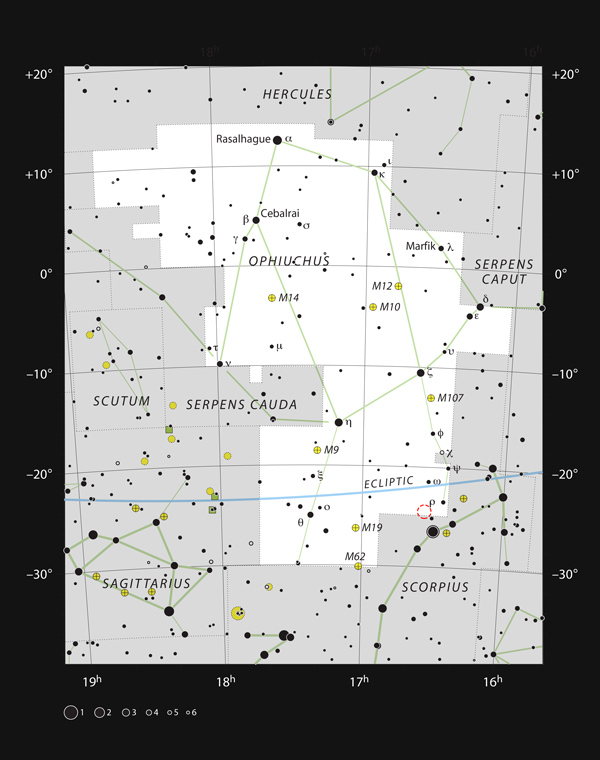 Niels Ligterink is delighted with the supporting laboratory results: “Besides detecting molecules we also want to understand how they are formed. Our laboratory experiments show that methyl isocyanate can indeed be produced on icy particles under very cold conditions that are similar to those in interstellar space. This implies that this molecule, and thus the basis for peptide bonds, is indeed likely to be present near most new young solar-type stars.”

[1] A complex organic molecule is defined in astrochemistry as consisting of six or more atoms, where at least one of the atoms is carbon. Methyl isocyanate contains carbon, hydrogen, nitrogen and oxygen atoms in the chemical configuration CH3NCO. This very toxic substance was the main cause of death following the tragic Bhopal industrial accident in 1984.

[2] The system was previously studied by ALMA in 2012 and found to contain molecules of the simple sugar glycolaldehyde, another ingredient for life.

[3] The team led by Rafael Martín-Doménech used new and archive data of the protostar taken across a large range of wavelengths across ALMA’s receiver Bands 3, 4 and 6. Niels Ligterink and his colleagues used data from the ALMA Protostellar Interferometric Line Survey (PILS), which aims to chart the chemical complexity of IRAS 16293-2422 by imaging the full wavelength range covered by ALMA’s Band 7 on very small scales, equivalent to the size of our Solar System.

[4] The teams carried out spectrographic analysis of the protostar’s light to determine the chemical constituents. The amount of methyl isocyanate they detected — the abundance — with respect to molecular hydrogen and other tracers is comparable to previous detections around two high-mass protostars (i.e. within the massive hot molecular cores of Orion KL and Sagittarius B2 North).

[5] Martín-Doménech’s team chemically modelled gas-grain formation of methyl isocyanate. The observed amount of the molecule could be explained by chemistry on the surface of dust grains in space, followed by chemical reactions in the gas phase. Moreover, Ligterink’s team demonstrated that the molecule can be formed at extremely cold interstellar temperatures, down to 15 Kelvin (–258 degrees Celsius), using cryogenic ultra-high-vacuum experiments in their laboratory in Leiden.

This research was presented in two papers: “First Detection of Methyl Isocyanate (CH3NCO) in a solar-type Protostar” by R. Martín-Doménech et al. and “The ALMA-PILS survey: Detection of CH3NCO toward the low-mass protostar IRAS 16293-2422 and laboratory constraints on its formation”, by N. F. W. Ligterink et al.. Both papers will appear in the same issue of the Monthly Notices of the Royal Astronomical Society.

The Atacama Large Millimeter/submillimeter Array (ALMA), an international astronomy facility, is a partnership of the European Organisation for Astronomical Research in the Southern Hemisphere (ESO), the U.S. National Science Foundation (NSF) and the National Institutes of Natural Sciences (NINS) of Japan in cooperation with the Republic of Chile. ALMA is funded by ESO on behalf of its Member States, by NSF in cooperation with the National Research Council of Canada (NRC) and the Ministry of Science and Technology (MOST) in Taiwan and by NINS in cooperation with the Academia Sinica (AS) in Taiwan and the Korea Astronomy and Space Science Institute (KASI).